A Witch Doctor for the Hyenas is a story from the Rafiki Remembers magazine collection. It was published in the 1990s as part of The Lion King: A Nature Fun and Learn Series.

The chiefest members of a hyena clan gather together to make important decisions regarding the future of the clan. As the meeting goes underway, the oldest hyena proclaims to the others that the clan needs a witch doctor who can forecast the future and heal them when they are ill. The other clan members are delighted with this idea and soon come to the consensus that Ground Hornbill should be their new leader.

The hornbill is flattered and promptly accepts. Since he does not know how to perform real magic, he decides to pretend instead in order to ensure his position as leader. Right away, he tells the hyena clan that he has gotten rid of the daylight, so the nocturnal hyenas can now hunt to their hearts' content.

That night, the hyenas plan a hunting raid on a nearby village. Throughout the night, they feast on caught prey, but come morning, the sun rises and the villagers awaken. The clan flees the village, but not before several members are killed by hunters.

When the clan meets again, Ground Hornbill is nowhere to be seen, so they elect a new leader, a bird named Francolin. Though this new witch doctor is not as impressive as the former, he is much wiser and helps to assist the hyenas in their hunts. While his first few whistles prompt the start of a hunt, his very last whistle announces the coming of dawn. To this day, francolins can be heard guiding hyenas in their timed hunts. 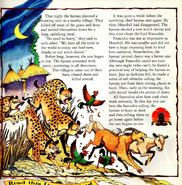 Add a photo to this gallery
Retrieved from "https://lionking.fandom.com/wiki/A_Witch_Doctor_for_the_Hyenas?oldid=190213"
Community content is available under CC-BY-SA unless otherwise noted.